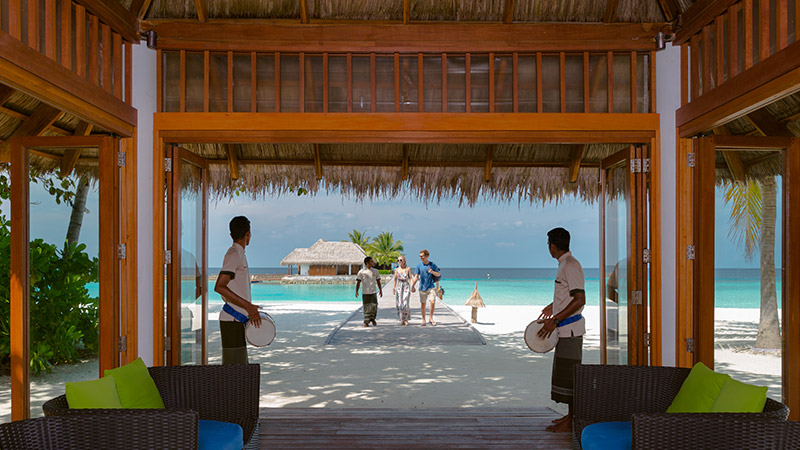 Typically, upon arrival in the Maldives, after clearing Immigration and Customs formalities, the guest will exit the Customs area and enter the Arrivals Hall, proceed to the nearby Crown & Champa Resorts (CCR) Booth #59, where a Representative will assist the guest. A guest is transferred from the International Arrival Terminal to the Maldivian Seaplane Terminal, about a 10-minute shuttle bus ride, and waits at the CCR Lounge before a scheduled seaplane transfer departs for Veligandu. The seaplane to Veligandu is normally scheduled to depart within one hour of all guests clearing Immigration and Customs.

In rare instances, such as if an international flight arrival is delayed or a baggage claim form must be completed, then the wait would usually be longer. While we do not assure the length of waiting period at the CCR Lounge would be, all efforts would be made between Veligandu and Maldivian to fly our guests at the earliest possible time.

Seaplanes fly during daylight hours only, i.e., between about 0600 and 1800. Airline policy requires passengers to check-in no later than 2 hours before flight time, therefore a Veligandu guest can connect by seaplane only to international flights departing VIA after 0900. Also, the last seaplane departure from Veligandu is about 1600.

Guests arriving on an international flight from which it is not possible to connect with the last seaplane departure from the Maldivian Seaplane Terminal (the guest must check-in at the Maldivian Seaplane Terminal no later than 1600) may choose to overnight at a Hotel in Male’, or remain at the Airport. Such matters are handled by the guest’s local ground handling agent.

Maximum checked-In luggage is 20 kilos per person; in extraordinary circumstances, luggage may be transported by boat or by a later flight (All other policies & procedures as per Airline regulations).